My Work Experience in the United Nations

4th year student, Anna McGarry, recently traveled to Geneva in Switzerland to do a week-long placement in the United Nations. Below, she tells us all about her about her experience.

For my 4th year work experience this year, I got the opportunity to travel to Geneva to do a week-long placement in the United Nations. I worked in the Office of International Oversight Services (OIOS) which organises the resources and staff of the UN.

Over 9,000 people currently work in the Palace of Nations, which has been the UN’s headquarters since 1946. On my first day of working there, my friend and I had to go through security and passport control to be able to enter the building, after that we were able to get UN visitor badges with our photo and name on them. 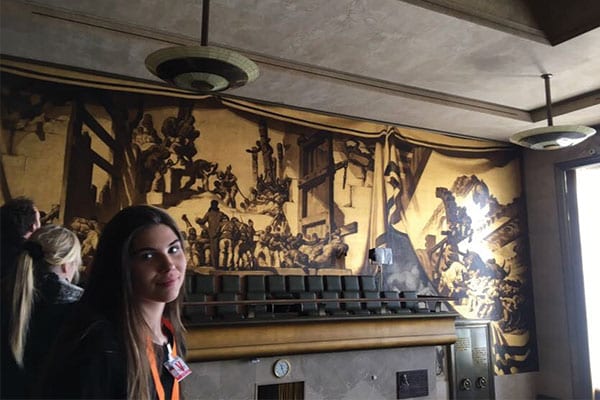 The first thing we did was go on the guided tour of the Palais of Nations. We were brought to a number of different conference rooms including the Human Rights and Alliance of Civilizations Room, the Assembly Hall, and the Council Chamber. I learnt a lot from the tour about interpreters – people who translate from one language to another very quickly during important conferences in the UN.

I worked on a Human Resource project during my time at the UN about what qualifications and certifications the employees at the UN had to have and I helped organise files and got the chance to interview some of the staff about how they got to work in the UN and what they do in their job.

I met a lot of interesting people, and learnt a lot about how certain people get to travel with their work to different countries and how some took exams many times in order to get into the UN. I also got to go to the annual bazaar that they have every year in the Palais of Nations. There was over 80 stalls from different countries that were selling native food, clothes, and objects. All of the proceeds from the bazaar went to financing projects for disadvantaged children worldwide and it was an amazing experience.

I also got the opportunity to go to a conference held in the UN. The topic of the conference was eliminating discrimination against women, and topics like gender equality and access to security and justice were also discussed. International experts like Kate Gilmore, UN Deputy High Commissioner for Human Rights spoke at the conference and there were many representatives and interpreters from the member states. It was very interesting to see how the conference ran.

I also visited WIPO (World Intellectual Property Organisation) where I learned about patents and protection for inventions and trademarks, the Red Cross museum and WHO (World Health Organisation) where I watched a play that’s aim was to raise awareness, and provoke debate around the inequality of conditions during pregnancy and giving birth. I also learnt that each year at least 300,000 women and over 5 million babies die because of complications during pregnancy and childbirth.

The week was an amazing opportunity and I learnt a lot and gained great experience. It really interested me to learn about the UN and what they do.